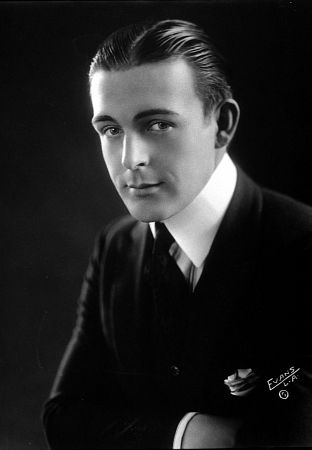 The son of writer-theater producer-director-actor Hal Reid, Wallace was on stage by the age of four in the act with his parents. He spent most of his early years, not on the stage, but in private schools where he excelled in music and athletics. In 1910, his father went to the Chicago studio of “Selig Polyscope Company” and Wallace decided that he wanted to be a cameraman. However, with his athletic good looks, he was often put in front of the camera instead of behind – a situation that he disliked. His first film before the camera was The Phoenix (1910), where he played the role of the young reporter. Wallace preferred to be a cameraman, a writer, a director – anything but an actor. He took his fathers play “The Confession” to Vitagraph where he wanted to write and direct the film. Wallace ended up also acting in it. Starting with bit parts in various films, Wallace was eventually cast as the leading man to Florence Turner in numerous films. Wallace next moved on to “Reliance” where he acted, but also wrote screenplays. His next big move was to Hollywood, where he was hired by Universal director Otis Turner, as assistant director, second cameraman, gopher and scenario writer. It was what he was looking for, but he ended up back in front of the camera. At 20, Reid was an unknown assistant director. In 1913, Wallace married Dorothy Davenport, one of the stars that he both directed and starred with. Although only 17, Dorothy had spent a number of years on the stage before heading to the silver screen. The roles that Wallace played were getting bigger and bigger, but after appearing in over 100 films, he took a salary cut and a small part to work with D.W. Griffith on his milestone film The Birth of a Nation (1915). It was after this film that Jesse L. Lasky signed Wallace to a contract with “Famous Players” and he became a big star, but his dreams of directing and writing ended. An alcoholic for years, this situation worsened. His first film for “Famous Players” was The Chorus Lady (1915). Wallace went on to star in a series of pictures in which he represented all that was best of the ideal American. He had parts in over 60 more pictures including Intolerance: Love’s Struggle Throughout the Ages (1916) and The Squaw Man’s Son (1917). But it was the daredevil auto movies that he was most popular at. Flashing cars, dangerous roads and sometimes a race with a speeding locomotive thrilled and scared the public. His auto pictures included The Roaring Road (1919), Excuse My Dust (1920) and Double Speed (1920). When the U.S. entered World War I, Wallace was 25, six foot one and a crack shot. Even though he wanted to enlist, pressure was exerted on him not to. He was the rock on which “Famous Players” was built and his loss would have materially effect the company. He had a newborn son and was the sole support for his wife, his son, his mother, her mother, his father and also had to consider his status as a matinée idol. He did volunteer his time to selling Liberty bonds and often opened his house to veterans. His films were financial successes, but in his personal life, he spent money like water. Wallace was a star who was worked continuously by the studio but disaster struck on a film site in Oregon. While making the film The Valley of the Giants (1919), Wallace was involved in a train crash and his injuries prevented him from finishing the film. Unwilling to stop the film, the studio sent the company doctor up to Oregon with a supply of morphine so that he would continue working and not feel the pain of his injury. After the picture was finished, he was needed to begin another so the studio kept supplying Wallace with morphine and he became hooked. Coupled with the alcohol, Wallace never had a chance and by 1922, he started entering a succession of hospitals and sanitariums as his health faded. Making his last film for the studio, Thirty Days (1922), Wallace was barely able to stand, let alone act. He died at the sanitarium, in Dorothy’s arms, on the 18th day of January 1923 at the age of only 31. Wallace was the third major Paramount personality to be involved in scandal in 1922.