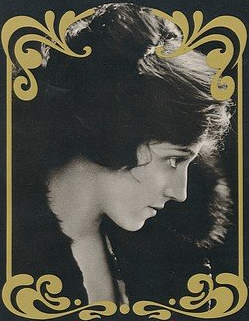 Miriam Cooper was born to Julian Cooper and Margaret Stewart in Baltimore, Maryland, in 1891. The family was Roman Catholic, and the Coopers were fairly well-to-do. After the birth of five children in five years (one of whom died in infancy), Julian Cooper deserted his family and fled to Europe. Margaret Cooper raised Miriam and her siblings Nelson, Gordon and Lenore with financial assistance from her mother-in-law. After grandmother Cooper died, the family lived in abject poverty and was forced to move from Washington Heights to Little Italy. At one point, Miriam spent time in an orphanage when her mother was too sick to take care of her. Miriam was educated at St. Walburga’s Academy, a convent school, and at Coopers Union Art School. Before stumbling into the nascent motion picture industry, she was a model for artists Harrison Fisher and Charles Dana Gibson. Her first film role was as an extra in D.W. Griffith’s A Blot on the ‘Scutcheon (1912). She next traveled to Florida where she played the ingénue in nearly 30 films for Kalem studios. Most of the films were Civil War dramas and romances, and Miriam did all of her own stunts, including horseback riding, running along the tops of trains and swimming a horse across a river, only to be fired in 1913 for asking for a raise. In 1914 Griffith rediscovered a screen test she made for him and brought her into his circle. Miriam had leading roles in both The Birth of a Nation (1915) and Intolerance: Love’s Struggle Throughout the Ages (1916). She also fell in love with one of Griffith’s assistant directors, Raoul Walsh. Knowing that Griffith would not like the idea of their getting married, Miriam and Walsh were secretly married on the Hopi Indian Reservation in Arizona in 1916. Walsh eventually left Griffith for Fox Films. When Miriam joined him, their marriage became public. Miriam lost interest in her film career after their marriage, but Walsh preferred to direct her, and she made quite a few movies for him at Fox, the most popular of which was probably Evangeline (1919). Miriam wanted to be a wife and mother, but the couple was unable to have children, so they adopted two boys. Eventually Miriam tired of Walsh’s philandering and divorced him in 1925. She never remarried, and although she felt some bitterness and resentment, it was obvious that she continued to love and admire him after the divorce. Miriam made her last film in 1923. She was tired of Hollywood and the film industry, and once she left it, she never looked back. The money she had saved was adequate for her to live very well. She became a golfing enthusiast and hit holes-in-one in three different states. In the 1960s she was rather surprised to be rediscovered by film historians and college students, but she enjoyed their attention. She completed her autobiography “Dark Lady of the Silents” in 1973, before dying of a stroke in 1976.