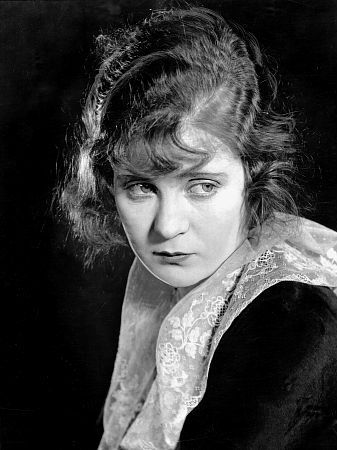 Mae Marsh’s father was an auditor for the railroad who died when she was four. Her family moved to San Francisco, where her stepfather was killed in the 1906 earthquake. Her great-aunt then took Mae and her sister to Los Angeles. With her show business background, Mae’s aunt took them to the various movie studios for work as extras. Mae was a little freckle-faced girl, who came to work one day as an extra at Biograph to substitute for her sick sister. She had blue eyes and her hair color was indeterminate, but she had definite screen presence. She began her film career working for Mack Sennett and D.W. Griffith. Her first leading role was as the bare-legged prehistoric girl in Man’s Genesis (1912). By 1913 Mae was being groomed as the successor to Mary Pickford. Most of her film roles were dramatic or tragic, or a combination of both. She appeared in Griffith’s The Birth of a Nation (1915) and Intolerance: Love’s Struggle Throughout the Ages (1916). After that film, Samuel Goldwyn signed her to a contract at $2500 per week – far exceeding the $35 per week she got in 1915. Goldwyn was at his best when it came to publicity. It was he who gave Mae the title “The Whim Girl”. Other than the publicity, her film career with Goldwyn was a disappointment and she retired on the eve of her marriage in 1918. During the 1920s Mae did a few movies in Hollywood and England, but stayed retired for the most part. It was not until the Wall Street “crash” in 1929 that began the Great Depression that she returned full-time to the screen, as she, like many others, was wiped out financially. After her financial situation improved, she returned to films sporadically, usually out of boredom. She worked in a dozen movies during the 1930s and took a number of roles in the 1940s and 1950s. She was a favorite of director John Ford and appeared in many of his films, such as The Grapes of Wrath (1940), How Green Was My Valley (1941), My Darling Clementine (1946) and The Quiet Man (1952), and she had a role in A Star Is Born (1954).