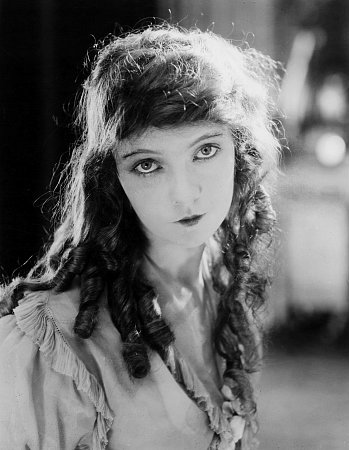 Lillian Diana Gish was born on October 14, 1893 in Springfield, Ohio. Her father James Lee Gish was an alcoholic who caroused around, was rarely at home and left the family to more or less to fend for themselves. To help make ends meet, Lillian, her sister Dorothy Gish and their mother Mary Gish a.k.a. Mary Robinson McConnell tried their hand at acting in local productions. Lillian was all of six years old when she first appeared in front of an audience. For the next 13 years, she and Dorothy appeared before stage audiences with great success. Actually, had she not made her way into films, Lillian quite possibly could have been one of the great stage actresses of all time. Ultimately, though, she found her way onto the big screen. In 1912, she met famed director D.W. Griffith. Impressed with what he saw, he immediately cast her in what was to be her first film, An Unseen Enemy (1912), followed by The One She Loved (1912) and My Baby (1912). She would make 12 films for Griffith in 1912. With 25 films in the next two years, Lillian’s exposure to the public was so great that she fast became one of the top stars in the industry, right alongside Mary Pickford, “America’s Sweetheart”. In 1915, Lillian starred as Elsie Stoneman in Griffith’s most ambitious project to date, The Birth of a Nation (1915). She was not making the large number of films that she was in the beginning, because she was successful and popular enough to be able to pick and choose the right films to appear in. The following year, she appeared in another Griffith classic, Intolerance: Love’s Struggle Throughout the Ages (1916). By the early 1920s, her career was on its way down. As in anything else, be it sports or politics, new faces appeared on the scene to replace the “old”, and Lillian was no different. In fact, she did not appear at all on the screen in 1922, 1925 or 1929. However, 1926 was her busiest of the decade with roles in La Bohème (1926) and The Scarlet Letter (1926). As the decade wound to a close, “talkies” were replacing silent films. However, Lillian was not idle during her time away from the screen. She appeared in stage productions to acclaim of the public and critics alike. In 1933, she filmed His Double Life (1933), and then didn’t make another film for ten years. When she did return in 1943, she played in two big-budget pictures, Commandos Strike at Dawn (1942) and Top Man (1943). It was as though she had never been away. Although these roles did not bring her the attention she had in her early career, Lillian still proved she could hold her own with the best of them. She earned an Oscar nomination as Best Supporting Actress for her role of Laura Belle McCanles in Duel in the Sun (1946), but lost to Anne Baxter in The Razor’s Edge (1946). One of the most critically acclaimed roles of her career came in the thriller The Night of the Hunter (1955), also notable as the only film directed by actor Charles Laughton. In 1969, she published her autobiography “The Movies, Mr. Griffith, and Me”. In 1987, she made what was to be her last motion picture, The Whales of August (1987), a box-office success that exposed her to a new generation of fans. Her 75-year career is almost unbeatable in any field, let alone the film industry. On February 27, 1993, Lillian Gish died at age 99 peacefully in her sleep in New York City.