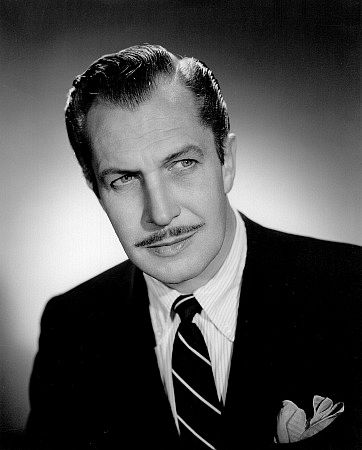 Actor, writer, and gourmet, Vincent Leonard Price, Jr. was born in St Louis, Missouri, to Marguerite Cobb (Wilcox) and Vincent Leonard Price, Sr., president of the National Candy Company. He traveled through Europe, studied at Yale and became an actor. He made his screen debut in 1938, and after many minor roles, he began to perform in low-budget horror movies such as House of Wax (1953), achieving his first major success with House of Usher (1960). Known for his distinctive, low-pitched, creaky, atmospheric voice and his quizzical, mock-serious facial expressions, he went on to star in a series of acclaimed Gothic horror movies, such as Pit and the Pendulum (1961) and The Abominable Dr. Phibes (1971). He abandoned films in the mid-1970s, going on to present cooking programs for television – he wrote “A Treasury of Great Recipes” (1965) with his second wife, Mary Grant – but had two final roles in The Whales of August (1987) and Edward Scissorhands (1990). He also recorded many Gothic horror short stories for the spoken-word label Caedmon Records. Vincent Price died at age 82 of lung cancer and emphysema on October 25, 1993.