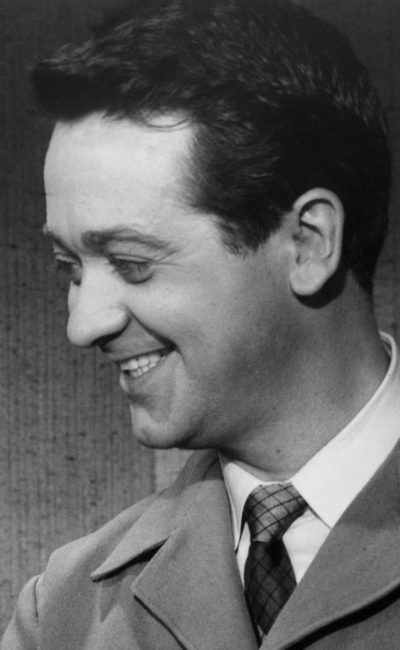 Slim, often bespectacled, comedy performer Tommy Noonan (nee Thomas Patrick Noone) started off in experimental theater, alongside his half-brother, actor John Ireland, who went on to have an enviable career of his own. The Delaware-born actor then launched his own repertory theatre back in his home state in the early 1940s. His career was interrupted by a stint in the Navy during WWII, but returned to it following his discharge. Tommy wound up in New York and briefly displayed his budding talents on Broadway before RKO signed him up for post-war films and he relocated out West. By this time, brother John, who was already a well-known film commodity, had met and married movie actress Joanne Dru, whose brother was a singer/actor named Peter Marshall. With a solid background in comedy and burlesque, Noonan hooked up with straight-man Marshall to form the 1950s comedy duo of “Noonan and Marshall”. They appeared with a modicum of success in clubs and on TV, including The Ed Sullivan Show (1948) (aka “The Ed Sullivan Show”). Their teaming, however, did not prevent them from boosting their own individual careers. Appearing in a few “B”-grade comedy film vehicles together, Tommy actually did much better solo on the large screen in solo performances as sort of a wry, nerdy Tony Randall type in top higher-grade films. He not only held his own as Marilyn Monroe’s smitten schmuck of a boyfriend in Gentlemen Prefer Blondes (1953), but went dramatic as Judy Garland’s blunt, piano-playing pal in A Star Is Born (1954) and received some of his best film reviews of his career. With Marshall, Tommy produced and wrote a couple of meager film vehicles to showcase the comedy team as a second-string “Martin and Lewis”, but the films, The Rookie (1959) and Swingin’ Along (1961), were flat and were barely noticed upon their release. These failures broke the duo up for good. (Peter Marshall went on to successfully host the TV game show, The Hollywood Squares (1965), as Peter Marshall). The pickings were slim for Tommy in the 1960s, and he resorted to producing and co-starring in a couple of exploitive soft-core “comedy” vehicles. Promises….. Promises! (1963), which showcased a fading Jayne Mansfield, and 3 Nuts in Search of a Bolt (1964), which starred an equally unmemorable Mamie Van Doren, were unmitigated disasters. His last producing effort was the thoroughly unredeemable Cottonpickin’ Chickenpickers (1967). The talented actor died five days before his 47th birthday in 1968 of a brain tumor, and was survived by his wife, Pokie, and four children. He is not related to actor/writer/director/composer Tom Noonan (born in 1951).