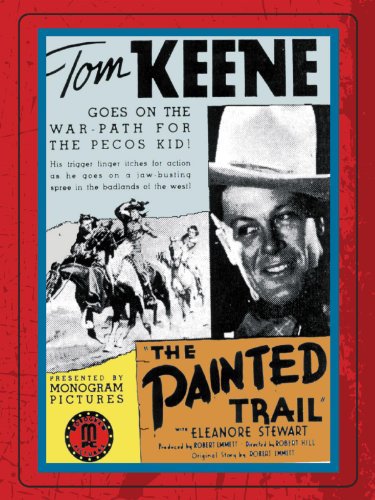 Not much is known about the early life of ruggedly handsome cowboy actor Tom Keene, born George Duryea in Rochester, New York. However, he arrived in Hollywood in the late 1920s after college studies at Columbia and Carnegie Tech and immediately made some impact as the lead of The Godless Girl (1929). Known for his sharp, pleasant looks and fitness, he was given the new name of Tom Keene and began appearing in a series of RKO “Poverty Row” Westerns in the early 1930s. Unlike other sagebrush stars of the time, such as Lash La Rue or William Boyd (“Hopalong Cassidy”), Tom’s heroes took on different names and appearances — wearing both black and white western outfits and hats — and his characters were not two-fisted men by nature. As a result, he remained a second-string, less identifiable Western star for the duration of his career. In addition, Tom purposely returned to the stage and even appeared in lesser roles but better quality films from time to time in order to avoid the typical Western stereotype. Inevitably, however, he would return to the minor studios such as Monogram and Republic Studios in cowboy garb in need of work. In 1944, Tom changed his name once again to Richard Powers in the last juncture of his career, which couldn’t have helped. He moved steadily down the credits line in pictures, appearing as villains on occasion. He retired in the late 1950s and focused on real estate and the insurance business. Tom died of cancer in 1963, and left a wife and stepson.