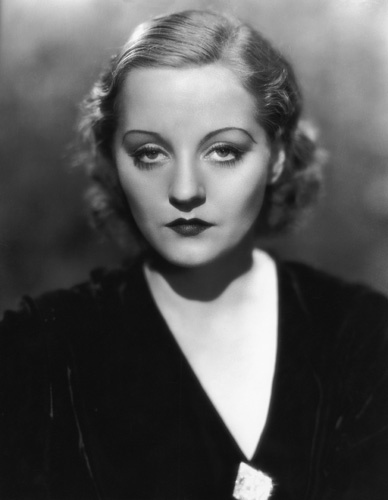 Tallulah Brockman Bankhead was born on January 31, 1902 in Huntsville, Alabama. Her father was a mover and shaker in the Democratic Party who served as Speaker of the United States House of Representatives from June 4, 1936, to September 16, 1940. Tallulah had been interested in acting and, at age 15, started her stage career in the local theater troupes of Huntsville and the surrounding areas. At age 16, she won a beauty contest and, bolstered by this achievement, moved to New York City to live with her aunt and to try her hand at Broadway. She was offered a role in Dr. Jekyll and Mr. Hyde (1920), but did not take it after she refused John Barrymore’s invitation for a visit to the casting couch. Unfortunately, for the young Miss Bankhead, she did not make any headway on the stages of New York, so she pulled up stakes and moved to London, in 1923, to try her luck there. For the next several years, she was the most popular actress of London’s famed West End, the British equivalent of Broadway. After starring in several well-received plays, she gained the attention of Paramount Pictures executives and returned to the United States to try her hand at the film world. Her first two films, Woman’s Law (1927) and His House in Order (1928), did not exactly set the world on fire, so she returned to do more stage work. She tried film work again with Tarnished Lady (1931), where she played Nancy Courtney, a woman who marries for money but ultimately gets bored with her husband and leaves him, only to come back to him when he is broke. The critics gave it a mixed reception. Tallulah’s personality did not shine on film as Paramount executives had hoped. She tried again with My Sin (1931) as a woman with a secret past about to marry into money. Later that year, she made The Cheat (1931), playing Elsa Carlyle, a woman who sold herself to a wealthy Oriental merchant who brands her like she was his own property and is subsequently murdered. The next year, she shot Thunder Below (1932), Faithless (1932), Make Me a Star (1932) (she had a cameo role along with several other Paramount stars) and Devil and the Deep (1932). The latter film was a star-studded affair that made money at the box-office due to the cast (Gary Cooper, Charles Laughton and newcomer Cary Grant). The films she was making just did not do her talent any justice, so it was back to Broadway–she did not make another film for 11 years. She toured nationally, performing in all but three states. She was also a big hit at social affairs, where she often shocked the staid members of that society with her “untraditional” behavior. She chain-smoked and enjoyed more than her share of Kentucky bourbon, and made it a “habit” to take her clothes off and chat in the nude. A friend and fellow actress remarked on one occasion, “Tallulah dear, why are you always taking your clothes off? You have such lovely frocks.” She was also famous–or infamous–for throwing wild parties that would last for days. She returned to films in 1943 with a cameo in Stage Door Canteen (1943), but it was Lifeboat (1944) for director Alfred Hitchcock that put her back into the limelight. However, the limelight did not shine for long. After shooting A Royal Scandal (1945) she did not appear on film again until she landed a role in Die! Die! My Darling! (1965). Her film and small-screen work consisted of a few TV spots and the voice of the Sea Witch in the animated film The Daydreamer (1966), so she went back to the stage, which had always been first and foremost in her heart. To Tallulah, there was nothing like a live audience to perform for, because they, always, showed a lot of gratitude. On December 12, 1968, Tallulah Bankhead died at age 66 of pneumonia in her beloved New York City. While she made most of her fame on the stages of the world, the film industry and its history became richer because of her talent and her very colorful personality. Today her phrase, “Hello, Dahling” is known throughout the entertainment world.