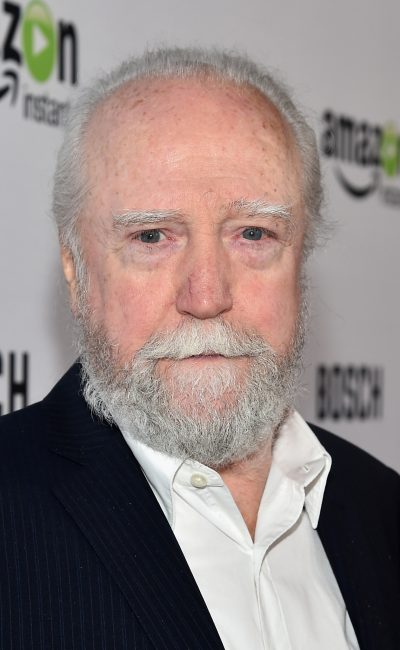 One chillingly infamous screen role for Scott Wilson in 1967 set the tone for an actor who went on to prove himself an invaluable character player for five decades. The Georgia-born native (Atlanta born and raised) was awarded a basketball scholarship following high school at Georgia’s Southern Tech University to study architecture. Instead, Wilson hitchhiked to Los Angeles on a whim and hooked up one day with an actor he met in a bar who took him to one of his auditions. Allowed to audition himself by chance, Wilson lost the part but was absolutely hooked. Working an assortment of menial jobs, he studied for nearly five years while gaining experience in such local theater productions as “The Importance of Being Earnest.” Scott’s fledgling career took off big time after being discovered by director Norman Jewison who cast him as a murder suspect in In the Heat of the Night (1967) starring Sidney Poitier and Best Actor Oscar winner Rod Steiger. If that weren’t a sufficient beginning, Wilson immediately followed this with the co-lead role of murderer Richard Hickok in the stark and disturbing In Cold Blood (1967), a superlative adaptation of the Truman Capote best-selling docu-novel. It didn’t hurt that Scott himself had a startling resemblance to the real-life killer. Partnering up with Robert Blake as two ex-cons who are eventually executed for the senseless, brutal slaughter of an entire Kansas farm family, the critically acclaimed film put both men squarely on the movie map. Although a serious contender, out-and-out stardom did not come about for the quietly handsome, slightly forlorn-looking actor. Major roles in major pictures, however, did. Among Scott’s early film work were Castle Keep (1969) and The Gypsy Moths (1969), both starring Burt Lancaster; The Grissom Gang (1971); Lolly-Madonna XXX (1973) (again with Steiger); The New Centurions (1972); The Great Gatsby (1974), in which he earned raves as the garage owner who shoots Robert Redford’s title character to death in Gatsby’s backyard swimming pool; The Ninth Configuration (1980), for which he received a Golden Globe nomination; The Right Stuff (1983); the Venice Film Festival winner A Year of the Quiet Sun (1984) [A Year of the Quiet Sun]; Malone (1987) and Johnny Handsome (1989). TV also showed off Scott’s dark, controlled intensity and wide range in later years, appearing in guest spots on such popular dramas as “The X-Files” and “The Twilight Zone,” and in a recurring role as Marg Helgenberger’s unscrupulous mobster father in “CSI.” In minimovies Scott played everything from Elvis’s father in Elvis and the Colonel: The Untold Story (1993) to a Wyoming governor in The Jack Bull (1999). Hardly one of Hollywood’s flashiest good ol’ boys, the taciturn, unassuming actor preferred to remain discrete and let his performances do the talking. His output was minimal compared with other character stars, but he remained in the quality ranks nevertheless, mixing his standard penchant for darker movies with such family-oriented films as Shiloh (1996) and its sequels. Supporting the newer “young guns” these days, he appeared with Vince Vaughn in Clay Pigeons (1998) and Ryan Phillippe in The Way of the Gun (2000), and ended up one of serial killer Charlize Theron’s victims in Monster (2003). Other strong showings on the big screen have included a lead part as a rockabilly star in Don’t Let Go (2002) and his down-home patriarch in the superb ensemble art film Junebug (2005), a breakout hit with Academy voters. In the 2010s, Scott gained a following sporting a full gray beard and ponytailed as grizzled farm owner Hershel Greene on the cable series The Walking Dead (2010). Wilson lived in Los Angeles along with his wife of four decades, Heavenly, an attorney and accomplished artist and writer.