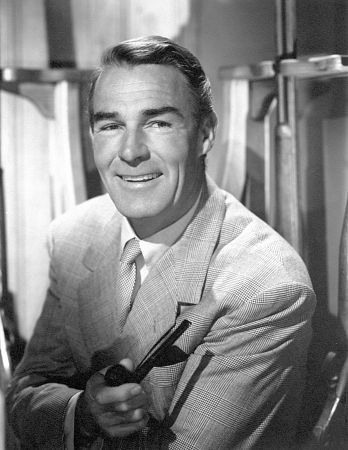 Handsome leading man who developed into one of Hollywood’s greatest and most popular western stars. Born to George and Lucy Crane Scott during a visit to Virginia, Scott was raised in Charlotte, North Carolina in a wealthy family. He attended Georgia Institute of Technology but, after being injured playing football, transferred to the University of North Carolina, from which he graduated with a degree in textile engineering and manufacturing. He discovered acting and went to California, where he met Howard Hughes, who obtained an audition for him for Cecil B. DeMille’s Dynamite (1929), a role which went instead to Joel McCrea. He was hired to coach Gary Cooper in a Virginia dialect for The Virginian (1929) and played a bit part in the film. Paramount scouts saw him in a play and offered him a contract. He met Cary Grant, another Paramount contract player, on the set of Hot Saturday (1932) and immediately moved in together. Their on-and-off living arrangement would last until 1942. Scott married and divorced wealthy heiress Marion DuPont in the late 1930’s. He moved into leading roles at Paramount, although his easy-going charm was not enough to indicate the tremendous success that would come to him later. He was a pleasant figure in comedies, dramas and the occasional adventure, but it was not until he began focusing on westerns in the late 1940s that he reached his greatest stardom. His screen persona altered into that of a stoic, craggy, and uncompromising figure, a tough, hard-bitten man seemingly unconnected to the light comedy lead he had been in the 1930s. He became one of the top box office stars of the 1950s and, in the westerns of Budd Boetticher especially, a critically important figure in the western as an art form. Following a critically acclaimed, less-heroic-than-usual role in one of the classics of the genre, Ride the High Country (1962), Scott retired from films. A multimillionaire as a result of canny investments, Scott spent his remaining years playing golf and avoiding film industry affairs, stating that he didn’t like publicity. He died in 1987 survived by his second wife, Patricia Stillman, and his two adopted children, Christopher and Sandra. He is buried in Charlotte, North Carolina.