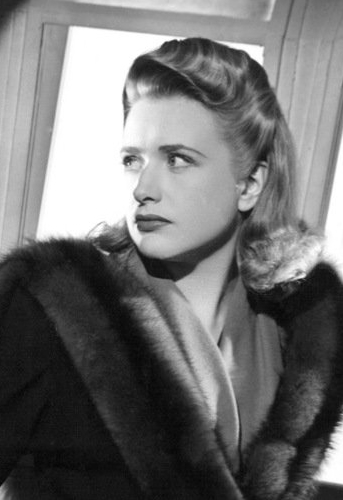 Priscilla Lane attended the Eagin School of Dramatic Arts in New York before she began touring with her sisters in the Fred Waring and the Pennsylvanians Dance Band. She was a popular singer with her sisters and, after 5 years, she was signed to a Hollywood contract with Warner Brothers in 1937. Her first film was Varsity Show (1937) where she had the hard task of portraying a singer with the Fred Waring Band. Priscilla was to play the nice girl against the temperamental star played by her sister Rosemary Lane. Over the years, Priscilla would play an assortment of girlfriends, daughters and fiancees. She would team with her two sisters, Rosemary Lane and Lola Lane, to make a series of drama’s beginning with the film Four Daughters (1938). That film would be the one that made John Garfield a star. In most of her films, all Priscilla had to do was to look attractive and give a good supporting performance. Priscilla would also co-star with Wayne Morris in three 1938 releases. In The Roaring Twenties (1939), she would play the girlfriend of James Cagney. In Arsenic and Old Lace (1944), which was release 3 years after it was filmed, she would play the fiancee of Cary Grant. When Alfred Hitchcock was unable to get Barbara Stanwyck, he cast Priscilla in Saboteur (1942) where she was on the run with the hero. By that time, her movie career was almost finished and she would appear in just a couple of films over the next five years before retiring in 1948.