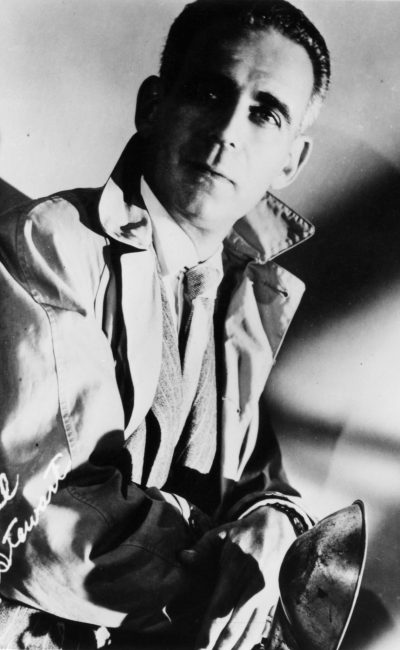 Esteemed character actor Paul Stewart had a pair of the coldest orbs in town and made his living for decades playing dark, callous, shiftless villains, including a vast number of mobsters. Not a well-known name per se, he was nevertheless a reliable actor who seemed to have been born for the film noir and gangland crime drama genre with his premature silvery hair, dark thick brows and probing, deep-set eyes, all accentuated by a tough and penetrating Brooklyn accent. Born in New York City on March 13, 1908, Stewart developed an interest for acting in his teens, making his Broadway debut with “Two Seconds” in 1931, following graduation from Columbia University. He had played a few more stage roles in New York when he met and made an impression on Orson Welles. As a result he became a founding member of the Mercury Theatre and a founding member of AFTRA when it was just a radio union. Stewart’s tough, guttural voice became a familiar sound on the 1930s airwaves and he was among the cast in the infamous Welles broadcast “The War of the Worlds.” He married band singer/actress Peg La Centra (1910-1996) in 1939 and over the years they appeared together on many radio programs. She also provided singing voices for such stars as Susan Hayward on celluloid. Welles next put Stewart in his films, with the classic Citizen Kane (1941) as Raymond, Kane’s wily valet, and Stewart found himself in demand as an untrustworthy character player. He essayed a number of stark, sinister types to perfection, with roles in such films as Johnny Eager (1941), Mr. Lucky (1943), Champion (1949), Illegal Entry (1949), Twelve O’Clock High (1949), Carbine Williams (1952), The Bad and the Beautiful (1952) and Kiss Me Deadly (1955). On TV he became a regular on a couple of short-lived series — Top Secret (1954) and The Man Who Never Was (1966). In the 1950s Stewart turned to stage and TV directing as well, helming a number of popular crimers such as Peter Gunn (1958), Michael Shayne (1960), Perry Mason (1957), It Takes a Thief (1968), Hawaii Five-O (1968) and Remington Steele (1982). His voice also fit the bill for cartoons in the 1960s. In 1974 Stewart suffered a heart attack while on location in New Mexico for Bite the Bullet (1975), but he returned sporadically to films, including the role of impresario Florenz Ziegfeld in W.C. Fields and Me (1976). He suffered a second and fatal heart attack in 1986 at age 77.