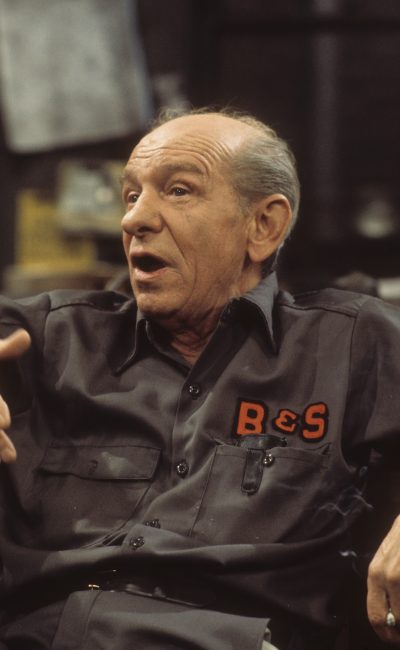 Veteran Polish-born character actor Ned Glass grew up in New York, and, after vaudeville experience, started acting in small parts on Broadway from the early 1930’s. He gained further experience in the capacity of theatrical production supervisor, before entering motion pictures in 1937 as an MGM contract player. Until the mid-1950’s, he was seen primarily in tiny supporting roles as clerks, reporters, bank tellers and small-time managers. His career was briefly put on hold after being blacklisted during the McCarthy era, but, with help from friends like John Houseman and Moe Howard (of The Three Stooges fame) he managed to get enough film work to make ends meet. By 1953, Ned began to find a new lease of life in television, where his roles were more varied and substantial. This afforded him the opportunity to fully develop his screen persona: that of the balding, weedy, perpetually nervy conman or weasely stooge, often delivering barbed repartee or wisecracks in a heavy Brooklyn accent. Ned was at his best in comedy, put to good use in several episodes of Jackie Gleason’s The Honeymooners (1955), and adapting well to anything else with a New York theme, from Kojak (1973) to Barney Miller (1974). He had many other good guest-starring roles on television, including several shifty characters in The Untouchables (1959), and as Freddie the Forger in Get Smart (1965) (‘Do I Hear a Vaults?’,1970). He was twice nominated for Emmy Awards, first, for an episode of Julia (1968) (as Sol Cooper); the second time in for Bridget Loves Bernie (1972) (Uncle Moe Plotnick). From the time he played Doc in West Side Story (1961), Ned also began to land some meatier roles on the big screen, including the character of Popcorn in Experiment in Terror (1962), and as Doc Schindler, in one of the funniest 60’s comedies, The Fortune Cookie (1966), directed by Billy Wilder. His best portrayal was that of the wily Leonard Gideon, sharpest of the villainous trio (the others being James Coburn and George Kennedy) on the trail of a quarter of a million dollar loot in gold, in the Hitchcockian thriller Charade (1963). Ned continued playing crusty reprobates in films and on television, his last being a small-time thief in an episode of Cagney & Lacey (1981). He died two years later in Encino, California, at the age of 78.