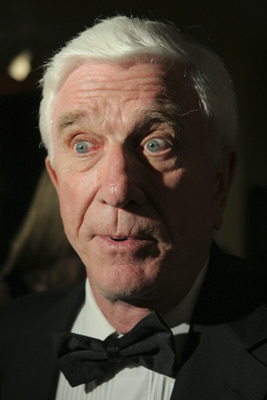 Leslie William Nielsen was born in Regina, Saskatchewan, and raised in Tulita (formerly Fort Norman), Northwest Territories. His mother, Mabel Elizabeth (Davies), was Welsh. His father, Ingvard Eversen Nielsen, was a Danish-born Mountie and a strict disciplinarian. Leslie studied at the Academy of Radio Arts in Toronto before moving on to New York’s Neighborhood Playhouse. His acting career started at a much earlier age when he was forced to lie to his father in order to avoid severe punishment. Leslie starred in over fifty films and many more television films. One of his two brothers became the Deputy Prime Minister of Canada. In 2002, he was made an Officer of the Order of Canada in recognition of his contributions to the film and television industries. Leslie Nielsen died at age 84 of complications from pneumonia on November 28, 2010.