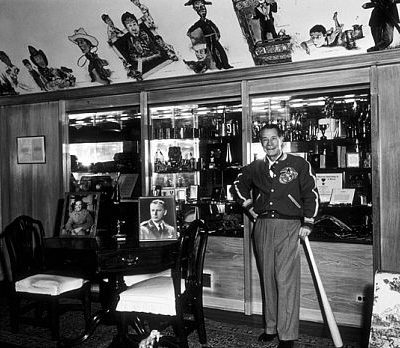 Joe E. Brown happily claimed that he was the only youngster in show business who ran way from home to join the circus with the blessings of his parents. In 1902, the ten-year-old Brown joined a circus tumbling act called the Five Marvellous Ashtons, which toured various circuses and vaudeville theaters. Joe later began adding comedy bits into his vaudeville act and added more as it became popular. In 1920 he debuted on Broadway in an all-star review called “Jim Jam Jems”. As he developed skits and comedy routines throughout the 1920s, he built up his confidence and his popularity soared. The same could not be said for his debut in movies. Hired for a non comedy role in The Circus Kid (1928), he played a lion tamer whose fate is death. He didn’t register with the public until he signed with Warner Brothers in 1929 to do comedy roles in the film adaptations of Broadway shows such as Sally (1929) and Top Speed (1930). Joe would be well known for his loud yell, his infectious grin and his cavernous mouth. Since many of his films revolved around sports, his natural athletic ability, combined with the physical comedy, made them hits. In Local Boy Makes Good (1931), Joe played a botanist who becomes a track star. As he had briefly played semi-pro baseball, he was a natural for films like Fireman, Save My Child (1932), in which he played a pitcher who was also a fireman. Two of his biggest hits involved the game of baseball, Elmer, the Great (1933) and Alibi Ike (1935). In his contract with Warners, he had it written that he would have his own baseball team at the studio to play when he was able. Joe was one of the top ten moneymaking stars for 1933 and 1936. In 1937, he left Warners to make films for David L. Loew, and it was a disaster. Most of the films were cheaply made with poor production values, and only a few were successful. Two of the better ones were Riding on Air (1937) and The Gladiator (1938). Brown always called signing with Loew his biggest professional mistake and with Loew his popularity fell. By the end of the 1930’s he was working in “B” material which would have been unimaginable less than five years earlier. With the advent of World War II, Joe worked tirelessly to entertain the troops while his film career floundered. Their enthusiastic response enabled Joe to overcome the death of his son, Captain Donald Brown, on a training flight. In 1947 Joe was back in the biz and back on stage in a road company tour of the comedy “Harvey”. His first movie role in three years was as a small-town minister in the drama The Tender Years (1948). Even though he gave a good performance, it would be another three years before he was again on the big screen, in the big-budget 1951 remake of Show Boat (1951), in which he played Captain Hawks. When his film career became almost nonexistent, Joe worked on radio and in television. He starred as the clown in the drama The Buick Circus Hour (1952) from 1952 to 1953 and made guest appearances on a number of other shows in the 1950s and early 1960s. His peers regarded him as one of the few truly nice people in Hollywood (a short list of his contemporaries would include Jean Hersholt and Jack Benny). After a few small movie roles in the 1950s, he was discovered by a new generation as the millionaire Osgood Fielding III in Billy Wilder’s classic Some Like It Hot (1959), uttering the last immortal line of the film, “Well, nobody’s perfect.”