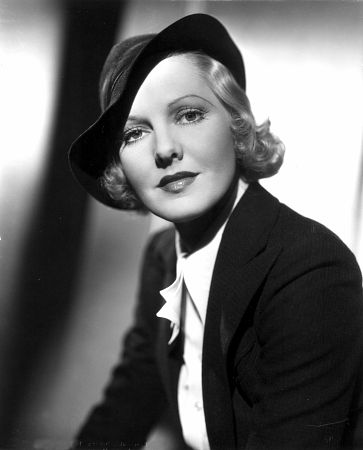 This marvelous screen comedienne’s best asset was only muffled during her seven years’ stint in silent films. That asset? It was, of course, her squeaky, frog-like voice, which silent-era cinema audiences had simply no way of perceiving, much less appreciating. Jean Arthur, born Gladys Georgianna Greene in upstate New York, 20 miles south of the Canadian border, has had her year of birth cited variously as 1900, 1905 and 1908. Her place of birth has often been cited as New York City! (Herein we shall rely for those particulars on Miss Arthur’s obituary as given in the authoritative and reliable New York Times. The date and place indicated above shall be deemed correct.) Following her screen debut in a bit part in John Ford’s Cameo Kirby (1923), she spent several years playing unremarkable roles as ingénue or leading lady in comedy shorts and cheapie westerns. With the arrival of sound she was able to appear in films whose quality was but slightly improved over that of her past silents. She had to contend, for example, with the consummately evil likes of Dr. Fu Manchu (played by future “Charlie Chan” Warner Oland). Her career bloomed with her appearance in Ford’s The Whole Town’s Talking (1935), in which she played opposite Edward G. Robinson, the latter in a dual role as a notorious gangster and his lookalike, a befuddled, well-meaning clerk. Here is where her wholesomeness and flair for farcical comedy began making themselves plain. The turning point in her career came when she was chosen by Frank Capra to star with Gary Cooper in the classic social comedy Mr. Deeds Goes to Town (1936). Here she rescues the hero – thus herself becoming heroine! – from rapacious human vultures who are scheming to separate him from his wealth. In Capra’s masterpiece Mr. Smith Goes to Washington (1939), she again rescues a besieged hero (James Stewart), protecting him from a band of manipulative and cynical politicians and their cronies and again she ends up as a heroine of sorts. For her performance in George Stevens’ The More the Merrier (1943), in which she starred with Joel McCrea and Charles Coburn, she received a Best Actress Academy Award nomination, but the award went to Jennifer Jones in The Song of Bernadette (1943) (Coburn, incidentally, won for Best Supporting Actor). Her career began waning toward the end of the 1940s. She starred with Marlene Dietrich and John Lund in Billy Wilder’s fluff about post-World War II Berlin, A Foreign Affair (1948). Thereafter, the actress would return to the screen but once, again for George Stevens but not in comedy. She starred with Alan Ladd and Van Heflin in Stevens’ western Shane (1953), playing the wife of a besieged settler (Heflin) who accepts help from a nomadic gunman (Ladd) in the settler’s effort to protect his farm. It was her silver-screen swansong. She would provide one more opportunity for a mass audience to appreciate her craft. In 1966 she starred as a witty and sophisticated lawyer, Patricia Marshall, a widow, in the TV series The Jean Arthur Show (1966). Her time was apparently past, however; the show ran for only 11 weeks.