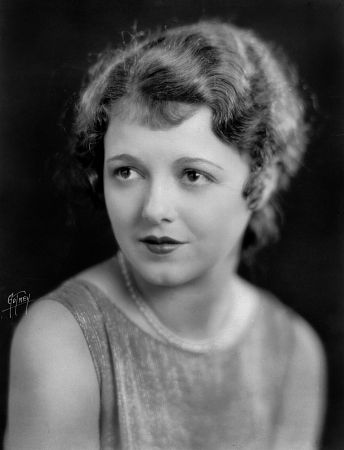 Janet Gaynor was born Laura Gainor on October 6, 1906, in Philadelphia, Pennsylvania. As a child, she & her parents moved to San Francisco, California, where she graduated from high school in 1923. She then moved to Los Angeles where she enrolled in a secretarial school. She got a job at a shoe store for the princely sum of $18 per week. However, since L.A. was the land of stars and studios, she wanted to try her hand at acting. She managed to land unbilled bit parts in several feature films and comedy shorts. She bided her time, believing “Good things come to those who wait.” She didn’t have to wait too long, either. In 1926, at the age of 20, she turned in a superb performance as Anna Burger in The Johnstown Flood (1926). The Hollywood moguls knew they had a top star on their hands and cast her in several other leading roles that year, including The Shamrock Handicap (1926), The Blue Eagle (1926), The Midnight Kiss (1926) and The Return of Peter Grimm (1926). The next year she turned in acclaimed performances in two classic films, 7th Heaven (1927) and Sunrise (1927). Based on the strength of those two films plus Street Angel (1928), Janet received the very first Academy Award for best actress. This was the first and only time an actress won the Oscar for multiple roles. When “talkies” replaced silent films, Janet was one of the few who made a successful transition, not only because of her great acting ability but for her charming voice as well. Without a doubt, Janet had already lived a true rags-to-riches story. Throughout the mid-1930s she was the top drawing star at theaters. She turned in grand performances in several otherwise undistinguished films. Then came A Star Is Born (1937). She was very convincing as Vicki Lester (aka Esther Blodgett), struggling actress trying for the big time. Told by the receptionist at Central casting “You know what your chances are? One in a hundred thousand,” Esther/Vicki replies, “But maybe–I’m that one.” For her outstanding performance she was nominated for another Oscar, but lost to Luise Rainer’s performance in The Good Earth (1937), her second in as many tries. After appearing in The Young in Heart (1938), Janet didn’t appear in another film until 1957’s Bernardine (1957). Her last performance was in a Broadway version of Harold and Maude. Although the play was a flop, Janet’s performance salvaged it to any degree – she still had what it took to entertain the public. On September 14, 1984, Janet passed away from pneumonia in Palm Springs, California, at the age of 77.