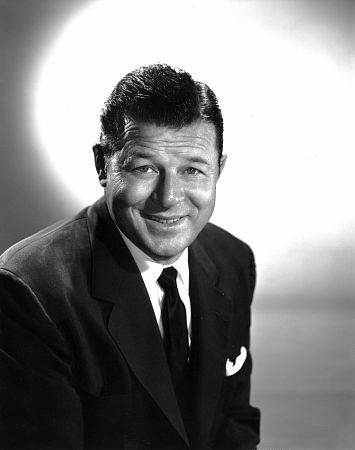 When Jack Carson arrived in Hollywood in 1937, he found work at RKO as an extra. His first major acting role came alongside Humphrey Bogart in the romantic comedy Stand-In (1937). After a few years, he developed into a popular character actor who would be seen in a large number of comedies, musicals and a few westerns. Not happy with the direction his career was heading, he went to Warner Brothers in 1941, where the quality of his supporting roles improved. It also did not hurt to be in films that starred James Cagney, such as The Strawberry Blonde (1941) and The Bride Came C.O.D. (1941). After three years, he starred with Jane Wyman in Make Your Own Bed (1944) and, again, in The Doughgirls (1944). Jack would play the nice guy with the heart of gold who was still a nice guy even when he was angry. He would take the double take and the quizzical look to a higher level, but he could also act in dramas. He provided a good portrayal of “Albert” in The Hard Way (1943) and was acclaimed for his performance in Mildred Pierce (1945). However, it was comedies that provided most of his work. He teamed up with his old friend, Dennis Morgan, for several films in the tradition of Bob Hope and Bing Crosby. It was in the 1940s that Jack would become popular as a wisecracking comedian on radio. This would lead him to TV in the 1950s, where he was one of 4 rotating hosts on All Star Revue (1950), until 1951, when he had left the show and the title was changed to “All Star Revue”. He then hosted and performed on The Colgate Comedy Hour (1950) from 1952-55. He would also help host The U.S. Royal Showcase (1952). He would appear on a number of shows during the 1950s, one of his most remembered being an episode of The Twilight Zone (1959), where he was a somewhat shady used-car salesman who came into possession of an old Model-A Ford that was “haunted” in that whoever owned it had to tell the truth, whether he wanted to or not. Although his movie career slowed in the 1950s, he still appeared in a number of prestige pictures, such as A Star Is Born (1954) with Judy Garland, The Tarnished Angels (1957) with Rock Hudson and Cat on a Hot Tin Roof (1958) with Paul Newman.