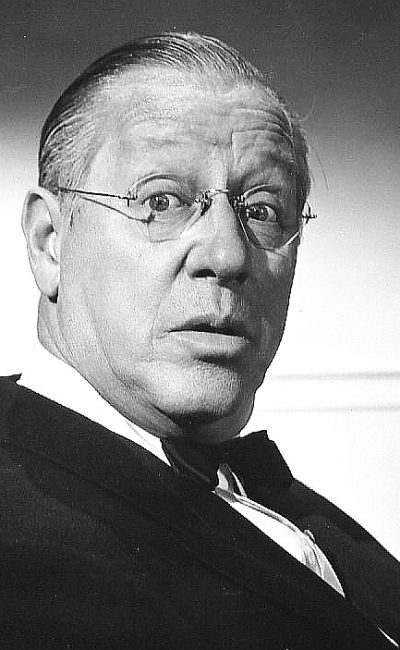 A minor character actor who appeared in literally hundreds of films, actor Irving Bacon could always be counted on for expressing bug-eyed bewilderment or cautious frustration in small-town settings with his revolving door of friendly, servile parts – mailmen, milkmen, clerks, chauffeurs, cab drivers, bartenders, soda jerks, carnival operators, handymen and docs. Born September 6, 1893 in the heart of the Midwest (St. Joseph, Missouri), he was the son of Millar and Myrtle (Vane) Bacon. Irving first found work in silent comedy shorts at Keystone Studios usually playing older than he was and, for a time, was a utility player for Mack Sennett in such slapstick as A Favorite Fool (1915). Irving made an easy adjustment when sound entered the pictures and after appearing in the Karl Dane and George K. Arthur two-reel comedy shorts such as Knights Before Christmas (1930), began to show up in feature-length films. He played higher-ups on occasion, such as the Secretary of the Navy in Million Dollar Legs (1932), police inspector in House of Mystery (1934), mayor in Room for One More (1952), and judge in Ambush at Cimarron Pass (1958), but those were exceptions to the rule. Blending in with the town crowd was what Irving was accustomed to and, over the years, he would be glimpsed in some of Hollywood’s most beloved classics such as Capra’s Mr. Deeds Goes to Town (1936), San Francisco (1936), You Can’t Take It with You (1938) and A Star Is Born (1954). Trivia nuts will fondly recall his beleaguered postman in the Blondie (1938) film series that ran over a decade. Irving could also be spotted on popular ’50s and ’60s TV programs such as the westerns Laramie (1959) and Wagon Train (1957), and “comedies December Bride (1954) and The Real McCoys (1957). He can still be seen in a couple of old codger roles on I Love Lucy (1951). One was as a marriage license proprietor and the other as Vivian Vance’s doting dad from Albuquerque, to whom she paid a visit on her way to Hollywood with the Ricardos. Irving died on February 5, 1965, having clocked in over 400 features.