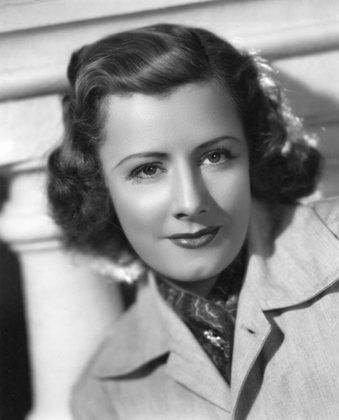 Irene Marie Dunne was born on December 20, 1898, in Louisville, Kentucky. She was the daughter of Joseph Dunne, who inspected steamships, and Adelaide Henry, a musician who prompted Irene in the arts. Her first production was in Louisville when she appeared in “A Midsummer Night’s Dream” at the age of five. Her “debut” set the tone for a fabulous career. Following the tragic death of her father when she was 12, she moved with her remaining family to the picturesque and historic town of Madison, Indiana, to live with her maternal grandparents at 916 W. Second St. During the next few years Irene studied voice and took piano lessons in town. She was able to earn money singing in the Christ Episcopal Church choir on Sundays. After graduating from Madison High School in 1916, she studied until 1917 in a music conservatory in Indianapolis. After that she accepted a teaching post as a music and art instructor in East Chicago, Indiana, just a stone’s throw from Chicago. She never made it to the school. While on her way to East Chicago, she saw a newspaper ad in the Indianapolis Star and News for an annual scholarship contest run by the Chicago Music College. Irene won the contest, which enabled her to study there for a year. After that she headed for New York City because it was still the entertainment capital of the world. Her first goal in New York was to add her name to the list of luminaries of the Metropolitan Opera Company. Her audition did her little good, as she was rejected for being too young and inexperienced. She did win the leading role in a road theater company, which was in turn followed by numerous plays. During this time she studied at the Chicago Music College, from which she graduated with high honors in 1926. In 1928, Irene met and married a promising young dentist from New York named Francis Dennis Griffin. She remained with Dr. Griffin until his death in 1965. Irene came to the attention of Hollywood when she performed in “Show Boat” on the East Coast. By 1930 she was under contract to RKO Pictures. Her first film was Leathernecking (1930), which went almost unnoticed. In 1931 she appeared in Cimarron (1931), for which she received the first of five Academy Award nominations. No Other Woman (1933) and Ann Vickers (1933) the same year followed. In 1936 (due to her comic skits in Show Boat (1936) she was “persuaded” to star in a comedy, up to that time a medium for which she had small affection. However, Theodora Goes Wild (1936) was an instant hit, almost as popular as the more famous It Happened One Night (1934) from two years before. From this she earned her second Academy Award nomination. Later, in 1937, she was teamed with Cary Grant in The Awful Truth (1937). This helped her garner a third Academy Award nomination. She starred with Grant later in My Favorite Wife (1940) and Penny Serenade (1941). Her favorite film was Love Affair (1939) with Charles Boyer, a huge hit in a year with so many great films, and a role for which she was again nominated for an Academy Award. Howevever, it was the tear-jerker I Remember Mama (1948) for which she will be best remembered in the role of the loving, self-sacrificing Norwegian mother. She got another nomination for that but again lost. This was the picture in which she should have won the Oscar. She began to wean herself away from films toward the many charities and public works she championed. Her last major movie was as Polly Baxter in 1952’s It Grows on Trees (1952). After that she only appeared as a guest on television. Irene knew enough to quit while she was ahead of the game and this helped keep her legacy intact. In 1957 she was appointed as a special US delegate to the United Nations during the 12th General Assembly by President Dwight D. Eisenhower, such was her widespread appeal. The remainder of her life was spent on civic causes. She even donated $10,000 to the restoration of the town fountain in her girlhood home of Madison, Indiana, in 1976, even though she had not been there since 1938 when she came home for a visit. She died of heart failure on September 4, 1990, in Los Angeles, California.