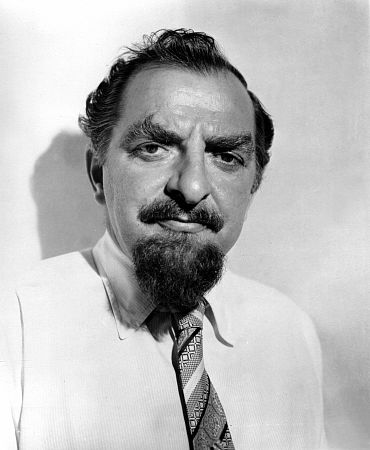 Enjoyably larger-than-life character actor Hugh Emrys Griffith was born in Marianglas, Anglesey, North Wales, to Mary (Williams) and William Griffith. Griffith left the world of banking (having been employed as a teller) after winning a scholarship to study acting at the Royal Academy of Dramatic Art. Though he graduated a gold medallist, top of his class of 300, the war put the brakes on his career and he enlisted in the Army in 1940, serving with the Royal Welsh Fusiliers in India for six years. Following the war, he enjoyed a successful career on the stage, appearing in Shakespearean plays in Stratford-upon-Avon with the Royal Shakespeare Company. He was particularly noteworthy as “Falstaff” and, his favourite role, “King Lear”, which he played both in English and in his native Welsh. On the other side of the Atlantic, he made his Broadway debut in 1951 and had a hit starring in “Look Homeward Angel” (1957-59) with Anthony Perkins and Jo Van Fleet. The play ran for 564 performances and earned Griffith a Tony Award nomination for the part of “W.O. Gant”. He later jokingly remarked, that, when the producers asked him to play a man from the deep south, he (Griffith) had understood that to mean a man from the deep south of Wales. Griffith started his film career proper in 1948 with films like Dulcimer Street (1948), followed by the wonderful black comedy Kind Hearts and Coronets (1949) at Ealing in 1949. A portly, thickly-bearded character with bushy eyebrows, ruddy complexion and a resonant bass voice, Griffith made a lasting impression for his many portrayals of eccentric, bucolic and, sometimes, raucous types. In 1959, he won the Academy Award as Best Supporting Actor for his “Sheikh Ilderim”, who supplies Charlton Heston with the chariot race-winning white stallions in Ben-Hur (1959). He was equally memorable as the lecherous “Squire Western” in Tom Jones (1963), a role for which he was nominated for both an Oscar and a BAFTA Award as Best British Actor. He later appeared in the critically-acclaimed musical version of Oliver! (1968), as a hilarious “King Louis” in Start the Revolution Without Me (1970) and one of Vincent Price’s many victims in The Abominable Dr. Phibes (1971). On television, he was a noteworthy, rolling-eyed “Long John Silver” in a 1960 version of “Treasure Island”, The DuPont Show of the Month: Treasure Island (1960), and roving-eyed funeral director “Caradog Lloyd-Evans” in the comedy Grand Slam (1978). Griffith was a lifelong friend (and drinking companion) of Welsh poet Dylan Thomas.