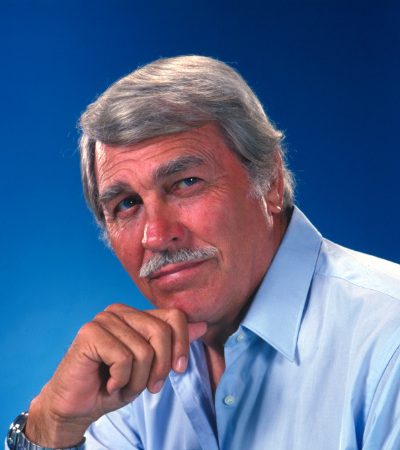 He was the Errol Flynn and Clark Gable of “golden age” movie musicals back in the 1950s. With a barrel-chested swagger and cocky, confident air, not to mention his lusty handsomeness and obvious athleticism, 6’4″ brawny baritone Howard Keel had MGM’s loveliest songbirds swooning helplessly for over a decade in what were some of the finest musical films ever produced. Born Harold Clifford Keel in Gillespie, IL, in 1919, his childhood was admittedly unhappy, his father being a hard-drinking coal miner and his mother a stern, repressed Methodist homemaker. When Keel was 11 his father died, and the family moved to California. He later earned his living as a car mechanic, then found work during WWII at Douglas Aircraft in Los Angeles. His naturally untrained voice was discovered by the staff of his aircraft company and soon he was performing at various entertainments for the company’s clients. He was inspired to sing professionally one day while attending a Hollywood Bowl concert, and quickly advanced through the musical ranks from singing waiter to music festival contest winner to guest recitalist. Oscar Hammerstein II “discovered” Keel in 1946 during John Raitt’s understudy auditions for the role of Billy Bigelow in Broadway’s popular musical “Carousel.” He was cast on sight and the die was cast. Keel managed to understudy Alfred Drake as Curly in “Oklahoma!” as well, and in 1947 took over the rustic lead in the London production, earning great success. British audiences took to the charismatic singer and he remained there as a concertist while making a non-singing film debut in the British crime drama The Hideout (1948) (aka “Hideout”). MGM was looking for an answer to Warner Bros.’ Gordon MacRae when they came upon Keel in England. They made a great pitch for him and he returned to the US, changing his stage moniker to Howard Keel. He became a star with his very first role, playing sharpshooter Frank Butler opposite brassy Betty Hutton’s Annie Oakley in the film version of the Broadway musical Annie Get Your Gun (1950). From then on Keel would be showcased in several of MGM’s biggest and most classic extravaganzas, with Show Boat (1951), Calamity Jane (1953), Kiss Me Kate (1953) and (his favorite) Seven Brides for Seven Brothers (1954) at the top of the list. Kismet (1955) opposite Ann Blyth would be his last, as the passion for movie musicals ran its course. The robust musical star also managed to move effortlessly into rugged (if routine) action fare, appearing in such 1960s films as Armored Command (1961), Waco (1966), Red Tomahawk (1967) and The War Wagon (1967), the last one starring John Wayne and featuring Keel as a wisecracking Indian, of all things. In the 1970s Keel kept his singing voice alive by returning full force to his musical roots. Some of his summer stock and touring productions, which included “Camelot,” “South Pacific,” “Seven Brides for Seven Brothers,” “Man of La Mancha,” and “Show Boat,” often reunited him with his former MGM leading ladies, including Kathryn Grayson and Jane Powell. He also worked up a Las Vegas nightclub act Ms. with Grayson in the 1970s. Keel became an unexpected TV household name when he replaced Jim Davis as the upstanding family patriarch of the nighttime soap drama Dallas (1978) after Davis’ untimely death. As Clayton Farlow, Miss Ellie’s second husband, he enjoyed a decade of steady work. In later years he continued to appear in concerts. As a result of this renewed fame on TV, Keel landed his first solo recording contract with “And I Love You So” in 1983. Married three times, he died in 2004 of colon cancer, survived by his third wife, three daughters and one son.