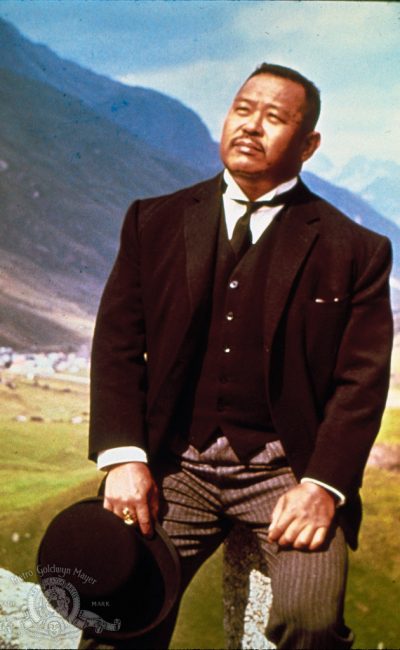 The most famous henchman of the entire James Bond series of spy thrillers, Harold Sakata will forever be remembered as the villainous “Odd Job” in the ultimate Bond film, Goldfinger (1964), with his lethal martial arts and steel-brimmed bowler hat. He was born Toshiyuki Sakata in Hawaii, of Japanese descent. From a young age he was a proficient sportsman who developed a keen interest in wrestling, and won a Silver Medal in weightlifting for the light heavyweight division of the 1948 Summer Olympics in London. Sakata then went on to become a professional wrestler, and appeared under the name “Tosh Togo” where he became a “bad guy” wrestler who allegedly threw salt in his opponent’s eyes. Although he had no acting background, Sakata came to the attention of Bond producers Harry Saltzman and Albert R. Broccoli when they were casting for the key role of the mute Asian villain “Odd Job”. Sakata’s steely gaze and powerful physique made him perfect for the role as Auric Goldfinger’s (Gert Fröbe) deadly bodyguard, and the fight sequence between Sean Connery and Sakata in a glittering, gold-filled Fort Knox remains one of the highlights of the Bond series. Unfortunately, Sakata never broke free of the “Odd Job” stereotype, and his remaining film appearances saw him cast as military figures, muscle-bound brutes or further mute bodyguards. He died from cancer in 1982, but had assured himself a very unique place in modern film history.