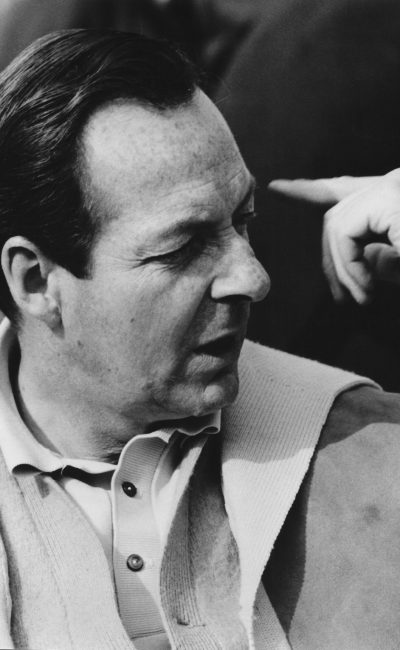 Typically British stiff-upper-lip war dramas and action adventure laced with moments of sophisticated comedy were Guy Hamilton’s trademark. The son of a British diplomat, he spent most of his youth with his family in France, seemingly destined to be groomed for a career in the diplomatic service. Growing up, he became enthralled with French cinema (and, particularly, with the films of Jean Renoir). This instilled in him a burning ambition to become a director himself. In 1939 Hamilton got his first job as a clapper boy with Victorine Studios in Nice (now known as Studios Riviera). He worked his way up the hard way via the accounting department and as a producer’s assistant. At the outbreak of World War II, British personnel were evacuated from France and Hamilton found work in the cutting room of British Paramount News which provided him with an excellent background in editing (albeit briefly–his career was soon interrupted by wartime duties in the Royal Navy with the 15th Motor Gunboat Flotilla). After the war, Hamilton got back into the movie business as a third assistant director (an experience he later described as amounting — more or less — to be a “gofer” and tea boy for the first assistant director). His big break eventually arrived courtesy of Carol Reed who took him under his wing as first assistant director for The Fallen Idol (1948). Reed became his mentor and a kind of father figure and exerted a profound influence on the budding filmmaker. Hamilton went on to work with Reed on The Third Man (1949) and Outcast of the Islands (1951)). For John Huston, he then served in the same capacity on The African Queen (1951) (one of his duties included building a pontoon made up of four or five pirogues to provide room for the cameras, as the “Queen” was too cramped to film on). Hamilton’s first film as director in his own right was The Ringer (1952), a minor thriller based on an Edgar Wallace story. He established himself properly with The Colditz Story (1955), a prisoner-of-war drama enlivened by deft humor and a pointedly “British” style. In the 1960s, his acquaintance with Albert R. Broccoli led to his directing four entries in the James Bond franchise (though he had turned down previous offers to helm the opener, Dr. No (1962): Goldfinger (1964), Diamonds Are Forever (1971), Live and Let Die (1973) and The Man with the Golden Gun (1974). In a later interview, Hamilton recalled that he (and writer Tom Mankiewicz) particularly enjoyed putting Bond into the “snake-pit” in situations of mortal peril, then working out a way to extricate him within 50 seconds. Hamilton’s “intellectual” interpretation of Bond, the witty, at times facetious humor –usually in the midst of hair-raising situations– contributed greatly to the popular and commercial success of these films. While these films established his reputation, much of his later work (Force 10 from Navarone (1978), Remo Williams: The Adventure Begins (1985) proved less endearing. In the mid-1980s, Hamilton retired to the island of Majorca with his second wife, actress Kerima (who had co-starred in “Outcast of the Islands”). He died there on 20 April 2016 at the age of 93.