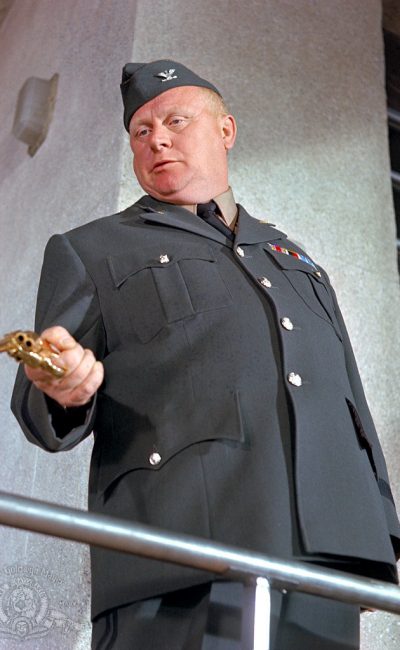 Tall, portly built German born actor (and talented violinist) who notched up over 100 film appearances, predominantly in German-language productions. He will forever be remembered by Western audiences as the bombastic megalomaniac “Auric Goldfinger” trying to kill Sean Connery and irradiate the vast US gold reserves within Fort Knox in the spectacular “James Bond” film Goldfinger (1964). However, due to Fröbe’s thick German accent, his voice was actually dubbed by English actor, Michael Collins. Whilst commonly perceived as cold hearted & humourless from his Goldfinger (1964) portrayal, quite to the contrary, Fröbe was a jovial man and a wonderful comedic performer. His light hearted talents can be best viewed in The Berliner (1948), Der Tag vor der Hochzeit (1952), Chitty Chitty Bang Bang (1968), and Those Magnificent Men in Their Flying Machines or How I Flew from London to Paris in 25 hours 11 minutes (1965). Fröbe also portrayed dogged detective Kriminalkommissar Kras/Lohmann pursuing the evil Dr. Mabuse in The 1,000 Eyes of Dr. Mabuse (1960), The Return of Dr. Mabuse (1961) and The Terror of Doctor Mabuse (1962).