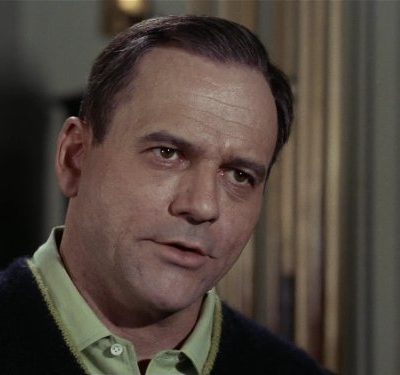 Short, dark, rough-looking and-tough-talking Irish-American character actor Gerald Stewart O’Loughlin was born on December 23, 1921, in New York City. Graduating from college with a degree in mechanical engineering, he turned to the stage, however, after contemplating a possible law career. After a stint in the U.S. Marine Corps, he used the GI bill instead to train in New York at the Neighborhood Playhouse. Throughout the early 1950s O’Loughlin regularly performed in stock and repertory plays. He highlighted his stage career playing Stanley in a national tour of “A Streetcar Named Desire” opposite the incomparable legend Tallulah Bankhead as Blanche. He later impressed once again as mental patient Cheswick opposite Kirk Douglas’s Randle McMurphy in 1963’s “One Flew Over the Cuckoo’s Nest” on Broadway. Gerald made a very little dent in films at the beginning, what with an offbeat romantic lead role in the low-budget Lovers and Lollipops (1956) and a small role in the more impressive A Hatful of Rain (1957). He later toughened things up with sturdy parts in In Cold Blood (1967), Ice Station Zebra (1968) and, especially, Desperate Characters (1971). Appearing in dramatic anthology programs from the early 1950’s and on such 60’s programs as “Ben Casey,” “Naked City,” “Dr. Kildare,” “Run for Your Life” and “The Green Hornet,” things finally clicked for him on 1970s TV when he nabbed the role of Lt. Ryker in the TV cop series The Rookies (1972) replacing Darren McGavin, who played the same role in the pilot. He went on to play his usual stern self in other less successful TV series — Automan (1983) and Our House (1986) O’Loughlin was highly affecting in TV movies as well, especially as the patriarch in the tearjerker Something for Joey (1977) with Geraldine Page. He continued to impress with strong, authoritarian roles in A Love Affair: The Eleanor and Lou Gehrig Story (1977), Women in White (1979), Child’s Cry (1986), Perry Mason: The Case of the Notorious Nun (1986) and Crime of the Century (1996). He also had sturdy roles in several acclaimed mini-series (Wheels (1978), Roots: The Next Generations (1979), Blind Ambition (1979) and A Matter of Life and Death (1981)), and was spotted over the years in a slew of guest parts on such established programming as “M*A*S*H,” “Fame,” “Matt Houston,” “Riptide,” “Murder, She Wrote,” “Too Close for Comfort,” “Highway to Heaven,” “ER, “The Division,” “Titans” and “Judging Amy.” 86-year-old Gerald made his last appearance in the short film Destinesia (2008) portraying an elderly man desperate to escape the confines of his nursing home. He died of natural causes in Los Angeles on July 31, 2015. His long-time wife, Meryl Abeles O’Loughlin (1933-2007), a casting agent, predeceased him. They had two children. One son, Chris, was a member of the 1992 U.S. Olympic épée fencing team.