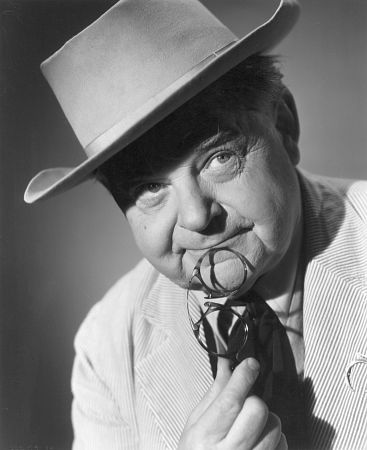 Gene Lockhart was born on July 18, 1891, in London, Ontario, Canada, the son of John Coates Lockhart and Ellen Mary (Delany) Lockhart. His father had studied singing and young Gene displayed an early interest in drama and music. Shortly after the 7-year-old danced a Highland fling in a concert given by the 48th Highlanders’ Regimental Band, his father joined the band as a Scottish tenor. The Lockhart family accompanied the band to England. While his father toured, Gene studied at the Brompton Oratory School in London. When they returned to Canada, Gene began singing in concert, often on the same program with Beatrice Lillie. His mother encouraged his career, urging him to try for a part on Broadway. Lockhart went to America. At 25, he got a part in a New York play in September, 1917, as Gustave in Klaw and Erlanger’s musical “The Riviera Girl.” Between acting engagements, he wrote for the stage. His first production was “The Pierrot Players” for which he wrote both book and lyrics and played. It toured Canada in 1919 and introduced “The World Is Waiting for the Sunrise” (words by Lockhart, music by Ernest Seitz), which became a very popular ballad.. “Heigh-Ho” (1920) followed, a musical fantasy with score by Deems Taylor and book and lyrics by Lockhart. It had a short run (again, with him in the cast). Lockhart’s first real break as a dramatic actor came in the supporting role of Bud, a mountaineer moonshiner, in Lula Vollmer’s Sun Up (1939). This was an American folk play, first presented by The Players, a theatrical club, in a Greenwich Village little theater in 1923. After great notices it moved to a larger house for a two-year run. During this engagement, in 1924 at the age of 33, Lockhart married Kathleen Lockhart (aka Kathleen Arthur), an English actress and musician. Gene meanwhile also appeared in a series of performances presented by The Players in New York theaters: as Gregoire in “The Little Father of the Wilderness”; as Waitwell in “The Way of the World,” as Gumption Cute in “Uncle Tom’s Cabin”, and as Faust in “Mephisto.” The Lockharts’ daughter, June Lockhart, was born in 1925. She would eventually appear regularly in the television series Lassie (1954) and Lost in Space (1965). In 1933, Gene and Kathleen were featured in “Sunday Night at Nine,” a radio program presented at New York’s Barbizon-Plaza Hotel. Meanwhile, Lockhart was keeping busy writing articles for theatrical magazines and a weekly column for a Canadian publication, coaching members of New York’s Junior League in dramatics, lecturing on dramatic technique at the Julliard School of Music, and directing a revival of “The Warrior’s Husband”–a formidable schedule. It amused him as he said that, “in spite of [the amount of work in a typical day] I don’t get thin.” Lockhart had by this time taken on the appearance that audiences would see again and again in films–short and plump with a chubby, jowly face and twinkling blue eyes. In 1933, he played Uncle Sid in the Theatre Guild’s production of Eugene O’Neill’s comedy “Ah, Wilderness!” co-starring George M. Cohan. This was the role that was to bring Lockhart stardom and lead to a contract with RKO Pictures and his first film, By Your Leave (1934). O’Neill wrote to Lockhart: “Every time your Sid has come in for dinner I’ve wanted to burst into song, and every time you’ve come down from that nap I’ve felt the cold gray ghost of an old heebie-jeebie.” The acclaim for his acting in “Ah, Wilderness!” allowed Lockhart to proceed to Hollywood and remain there almost without interruption. However, he was back on Broadway in December, 1949, when he took over the part of Willy Loman in the New York production of “Death of a Salesman.” Lockhart appeared in over 125 films. Though he often played upright doctors, judges and businessmen, and was in real life described as an amiable and gentle soul, Lockhart is perhaps best remembered on film as a villain who usually ends up cowering in a corner whimpering pitifully before getting his just desserts, a scene he played to the hilt in such movies as Algiers (1938) (for which he was nominated for an Oscar), Blackmail (1939), Geronimo (1939), Northern Pursuit (1943), and Hangmen Also Die! (1943). Late on Saturday, March 30, 1957, Lockhart suffered a heart attack while sleeping in his apartment at 10439 Ashton Avenue in West Los Angeles. He was taken to St. John’s Hospital and died on Sunday afternoon, March 31. He is buried in Holy Cross Cemetery.