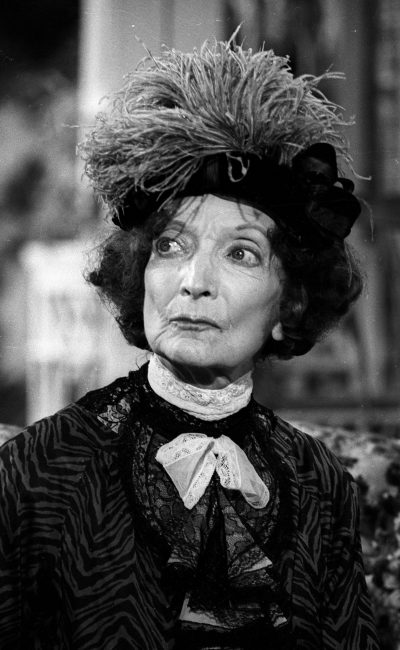 When Estelle saw the girl on a white horse at the circus, she then decided that she wanted to be an actress. And she was from the age of 5, to the disapproval of her father. Her mother had her train with the Liverpool Repertory Company, and Estelle performed in many plays and many roles in the West End. In 1916, she made her debut on Broadway and worked with a number of acclaimed stage actors. Estelle spent the rest of the ‘teens and ’20s working in plays on both sides of the Atlantic. Being an actor in the theater, Estelle was not about to be one of those who acted in flicks and held out for a very long time. In fact, besides a small role in a few English films in the early 1930s, her real debut was Quality Street (1937), a picture that she undertook when she was in her 50s. Anyway, that was enough as it would be almost two decades before she would return to the big screen. She appeared on the stage in the plays “The Merry Wives of Windsor,” “Ten Little Indians,” and “The Importance of Being Earnest.” But, in 1955, Estelle did return to the movies as Leslie Caron’s “fairy godmother” in The Glass Slipper (1955). Estelle would spend the next 10 years appearing in films, often cast as eccentric, frail old ladies, some of whom could be deadly. Not to be left out, Estelle also would work on Television, doing guest spots in a number of shows. At 84, Estelle played a woman who was enamored by crooked Zero Mostel in the comedy The Producers (1967). Her last film would be the detective spoof Murder by Death (1976). When Estelle was asked, on the occasion of her 100th birthday, how she felt to have lived so long, she replied, “How rude of you to remind me!”.