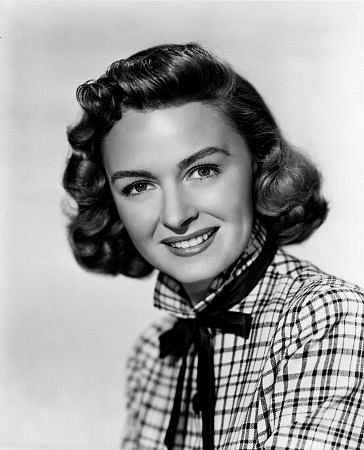 Donna Reed was born in the midwestern town of Denison, Iowa, on January 27, 1921, as Donna Belle Mullenger. A small town – a population of less than 3,000 people – Denison was located by the Boyer River, and was the county seat of Crawford County. Donna grew up as a farm girl, much like many young girls in western Iowa, except for one thing – Donna was very beautiful. That wasn’t to say that others weren’t as pretty, it’s just that Donna’s beauty stood out from all the other local girls, so much so that she won a beauty contest in Denison. Upon graduation from high school Donna left for college in Los Angeles, in the hopes of eventually entering movies. While at Los Angeles City College, she pursued her dream by participating in several college stage productions. In addition to the plays, she also won the title of Campus Queen. At one of those stage plays Donna was spotted by an MGM talent scout and was signed to a contract. Her first film was a minor role in MGM’s The Getaway (1941). That was followed by a small part in Babes on Broadway (1941), with Mickey Rooney and Judy Garland as a secretary. Afterwards, MGM began giving her better parts, in films such as The Bugle Sounds (1942), The Courtship of Andy Hardy (1942) and The Man from Down Under (1943). In 1944 she received second billing playing Carol Halliday in See Here, Private Hargrove (1944), a comedy about a reporter drafted into the army who eventually meets up with Donna’s character as a worker in the canteen. The following year Donna starred in The Picture of Dorian Gray (1945), her best role to date. It was a love story set in London in 1890. It got mixed critical reviews but did well at the box-office. Donna was now one of the leading ladies of Hollywood. In 1946 she starred in what is probably her best-known role, as the wife of James Stewart in the classic It’s a Wonderful Life (1946). This timeless story is a holiday staple to this day. The film also starred Lionel Barrymore and Thomas Mitchell. The next year Donna starred as Ann Daniels in Paramount’s Beyond Glory (1948) with Alan Ladd, which did well at the box-office. Her next role was the strongest she had had yet–Chicago Deadline (1949), again with Ladd. It was one of the best mystery dramas to come out of Hollywood in a long time, and did very well at the box office. As the 1940s faded out and the 1950s stormed in, Donna’s roles got bigger but were mainly of the wholesome, girl-next-door type. In 1953, however, she starred as the hostess Alma in the widely acclaimed From Here to Eternity (1953). She was so good in that film she was nominated for and won the Academy Award for Best Supporting Actress, beating out such veterans as Thelma Ritter and Marjorie Rambeau. The film itself won for Best Picture and remains a classic to this day. Later that year Donna starred in The Caddy (1953), a comedy with Jerry Lewis and Dean Martin. Three years later she landed the role of Sacajawea in The Far Horizons (1955), the story of the Lewis and Clark Expedition, starring Charlton Heston and Fred MacMurray. After finishing The Whole Truth (1958), Donna began her own TV series (produced by her husband), The Donna Reed Show (1958), a hit that ran for eight years. She was so effective in the show that she was nominated for TV’s prestigious Emmy Award as Best Actress every year from 1959-1962. She was far more popular in TV than on the screen. After the run of the program, Donna took some time away from show business before coming back in a couple of made-for-TV movies (in 1974, she had made a feature called Yellow-Headed Summer (1974), but it was never released). She did get the role of Ellie Ewing Farlow in the hit TV series Dallas (1978) during the 1984-85 season. It was to be her final public performance. On January 14, 1986, less than two weeks before her 65th birthday, she died of pancreatic cancer in Beverly Hills, California. Grover Asmus, her husband, created the Donna Reed Foundation for the Performing Arts in her hometown of Denison. The foundation helps others who desire a career in the arts. Donna never forgot her roots. She was still a farm girl at heart.