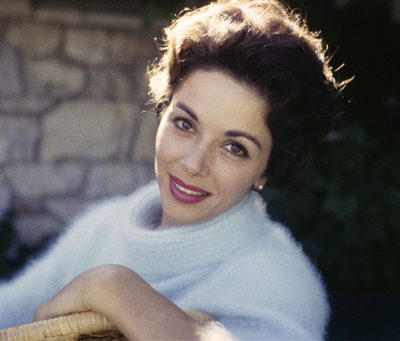 The daughter of a noted surgeon, Dana Wynter was born Dagmar Winter in Berlin, Germany, and grew up in England. When she was 16 her father went to Morocco, reportedly to operate on a woman who wouldn’t allow anyone else to attend her; he visited friends in Southern Rhodesia, fell in love with it and brought his daughter and her stepmother to live with him there. Wynter later enrolled as a pre-med student at Rhodes University (the only girl in a class of 150 boys) and also dabbled in theatrics, playing the blind girl in a school production of “Through a Glass Darkly”, in which she says she was “terrible.” After a year-plus of studies, she returned to England and shifted gears, dropping her medical studies and turning to an acting career. She was appearing in a play in Hammersmith when an American agent told her he wanted to represent her. She left for New York on November 5, 1953, “Guy Fawkes Day,” a holiday commemorating a 1605 attempt to blow up the Parliament building. “There were all sorts of fireworks going off,” she later told an interviewer, “and I couldn’t help thinking it was a fitting send-off for my departure to the New World.” Wynter had more success in New York than in London, acting on TV (Robert Montgomery Presents (1950), Suspense (1949), Studio One in Hollywood (1948), among others) and the stage before “going Hollywood” a short time later. The willowy, dark-eyed actress appeared in over a dozen films, worked in “Golden Age” television (such as Playhouse 90 (1956)) and even co-starred in her own short-lived TV series, the globe-trotting The Man Who Never Was (1966). Married and divorced from well-known Hollywood lawyer Greg Bautzer, Wynter, once called Hollywood’s “oasis of elegance”, divided her time between homes in California and County Wicklow, Ireland until her death.