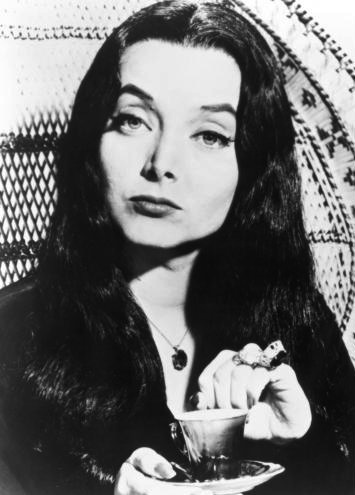 Carolyn Jones was born April 28, 1930, in Amarillo, Texas. Her mother was Jeannette and her sister was Bette (Moriarty). She was an imaginative child, much like her mother. In 1934, her father abandoned the family and her mother moved them in with her parents, also in Amarillo. As a child Carolyn suffered from severe asthma. Although she loved movies, she was often too sick to attend, so she listened to her favorites, Danny Kaye and Spike Jones and read as many movie fan magazines as she could. She dreamed of attending the famed Pasadena Playhouse and received many awards at school for speech, poetry, and dramatics. In 1947, she was accepted as a student at the Pasadena Playhouse, and her grandfather agreed to pay for her classes. She worked in summer stock to supplement her income, graduating in 1950. She gave herself a complete head-to-toe makeover, including painful cosmetic nose surgery to make herself ready for movie roles. Working as an understudy at the Players Ring Theater, she stepped in when the star left to get married. She was seen by a talent scout from Paramount and given a screen test, which went well. She made her first appearance in The Turning Point (1952). She did some other work during her 6-month contract, but when it ended, Paramount, suffering from television’s impact, let it lapse. She quipped, “They let me and 16 secretaries go!” She started working in television but kept busy on stage as well. There she met Aaron Spelling, and they became a couple. She made a breakthrough in the 3-D movie House of Wax (1953) and garnered excellent reviews. Aaron was still struggling, so he felt he wasn’t able to propose to Carolyn; she finally proposed to him. They were married in April 1953. Neither was earning much, but they really enjoyed each other and their life. Many saw them as an ideal couple. Carolyn decided against children, since she felt she could not juggle the demands of both a career and a family. Columbia Pictures saw her and wanted to test her for the part of prostitute Alma Burke in From Here to Eternity (1953), but she got extremely sick with pneumonia and the part went to Donna Reed instead. She did, however, achieve success in the sci-fi classic Invasion of the Body Snatchers (1956), a subtle allegory of the times (McCarthyism). Aaron had little success as an actor and Carolyn pushed him to become a writer, even threatening to leave him. She constantly promoted his scripts whenever she could and he was ultimately hired by Dick Powell. Carolyn meanwhile was successful once more in The Bachelor Party (1957) (famous line, “Just say you love me–you don’t have to mean it!”). For this role, she surprised cast members by dying her hair black and cutting it short. This stunning look served her well for a number of roles. For her eight minutes on screen, she received glowing reviews and was nominated for an Academy Award but lost. She followed this with an impressive appearance in King Creole (1958), generally regarded as Elvis Presley’s best film. She then gave arguably her best performance ever in Career (1959), but the film was not commercially successful. She played a serious role in this, leaving the kooky role she might have played to Shirley MacLaine. As Aaron’s career soared, the marriage started to fail. They separated in October 1963 and were amicably divorced in August 1964, with Carolyn asking for no alimony. They remained friends. She worked at various roles until she got the part for which she will best be remembered, that of Morticia Addams in The Addams Family (1964). She spent two years in this role. Her costume was designed to copy the cartoon drawings and no doubt inspired such imitators as Cassandra Peterson (Elvira, Mistress of the Dark). The show went head-to-head with The Munsters (1964) and Bewitched (1964). The quite blatant sexual chemistry between Morticia and her husband Gomez (John Astin was shocking for the time, perhaps only matched by the sexuality displayed in “Bachelor Party” and “King Creole.” The show was a big hit and she received all the fame she had craved. However, the network decided to cancel the show, despite its success, after only two years. Typecast as Morticia but without the income that a few more years would have provided, she found life difficult and roles few. While acting on the road, she married her voice coach, Herbert Greene, a well-known and respected Broadway conductor and musical director, and they moved together to Palm Springs, California. After seven years, she left him and returned to Hollywood, determined to try to restart her career. She was surprisingly successful and performed in several shows, including an episode of Fantasy Island (1977) in 1978, a show on which Aaron was the producer. She played Myrna Clegg on the soap Capitol (1982) from 1982 to 1983, despite having been diagnosed with colon cancer in 1981. She had aggressive treatment for the cancer, but it returned during her time on the show and she was told it was terminal. She played some scenes despite being confined to a wheelchair and working in great pain. Although they knew she was dying, she married her boyfriend of five years, Peter Bailey-Britton, in September 1982. She died on August 3, 1983. Carolyn told her sister that she wanted her epitaph to be “She gave joy to the world.” She certainly had many friends who loved her greatly, and many fans who enjoyed her wonderful performances.