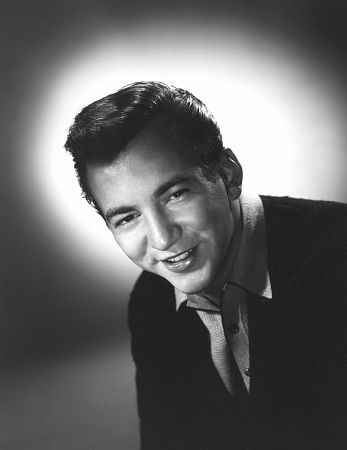 Walden Robert Cassotto, nicknamed “Bobby”, was born in The Bronx, New York, in 1936. Severe rheumatic fever as a child scarred his heart and led to an overprotected and pampered childhood. He was the focal point of a family that fostered and encouraged his love of music. His music career started out with writing songs and taking demos around to different music producers. In 1958 he performed the song “Splish, Splash” on Dick Clark’s New American Bandstand 1965 (1952). It was a huge hit and eventually would sell over one million copies. The next year was a big one – he won two Grammies, for Best Record (“Mack the Knife”) and Best New Artist. “Mack the Knife” stayed in the top ten for 52 weeks, nine of those at #1. This was Bobby’s fourth gold record. His next goal was to make a movie, and that opportunity came in 1960 with the film Come September (1961), for which he also wrote the title song. The movie was filmed in Rome and that’s where he met Sandra Dee. She was 16 years old and at the top of her career. They were engaged two months after they met and their son, Dodd Darin, was born a year later. Bobby continued to perform in night clubs and make movies. In 1964 he was nominated for an Academy Award for Best Supporting Actor in Captain Newman, M.D. (1963). Despite very good reviews, he lost the Oscar to Melvyn Douglas. In 1967 he asked for and was granted a divorce. Sandra was quoted as saying, “He just woke up one morning and didn’t want to be married anymore”. More realistically, their careers had kept them apart more often than not, and they had struggled with the marriage practically from the beginning. He went in for heart surgery in 1971 and from that point on he had bouts of ill health. After his recovery he continued to do nightclub acts and the next year he did a popular summer variety show called The Bobby Darin Show (1973). The last year of his life was spent dealing with health problems related to his heart, yet he continued to work when he could. He died at Cedars-Sinai Hospital in Los Angeles on December 20, l973, following open heart surgery.