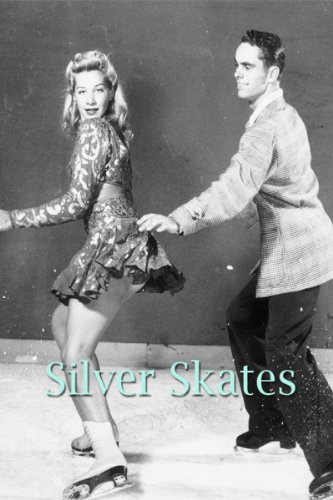 Exalted by her adoring fans as “Belita, the Ice Maiden”, this Hollywood lady-in-waiting to Sonja Henie, was born Maria Belita Jepson-Turner in Hampshire, England on October 21, 1923. Trained in dance not long after learning how to walk (age 2), she went on to study ballet with Sir Anton Dolin. Belita’s father was a military officer and mother the daughter of a royal physician to King Edward VII. The mother was a strong-armed presence when it came to Belita and immediately geared her daughter towards becoming a star ballerina. Using skating to build up her overall strength, poise and endurance, ice soon took over Belita’s life completely. A remarkably lithe and graceful athlete, she appeared in the Olympic games of 1936 at the age of 12(!) and turned professional two years later where she continued to keep her name, talent and reputation in the limelight. She also spoke four languages and played the violin. After the Norwegian Henie became a major Hollywood commodity with film extravaganzas being built around her prowess as a skater, it was only natural that England’s version follow suit. Lovely Belita made her minor film debut as an ice dancer in the Republic Pictures movie Ice-Capades (1941), alongside other hard-water talents such as Lois Dworshak, Megan Taylor and Republic film star-to-be Vera Ralston. Belita’s next film, however, put her prominently into the co-starring ranks. Silver Skates (1943) may have been a mediocre ice musical soap drama with a number of slippery angles but she was front-and-center. She followed this with a top-billed role in the lowbudget Monogram Pictures’ Lady, Let’s Dance (1944), in which she played under her own name. Here she’s a war refugee/waitress/dancer who replaces the show’s prima donna star at the last minute, and the romantic drama that ensues with her leading man. In it Belita gets to show off every aspect of her dance capabilities — ballet, ballroom and, of course, ice. It was to be her last movie vehicle on hard water for while Henie had a big studio (Fox) promoting her, Belita had only a “Poverty Row” build-up. No contest. Determined to maintain a post-war acting career, Belita decided to set foot on solid ground with purely dramatic vehicles. Her first was a suspense film aptly titled Suspense (1946) starring heavyweights Barry Sullivan and Albert Dekker. Although this film-noir had an ice-skating setting and, yes, Belita does skate, the picture evolves this time around the dramatic plot. She hung up her skates while appearing with Sullivan again in The Gangster (1947), with Preston Foster in The Hunted (1948), and enjoyed secondary roles in the classic mystery The Man on the Eiffel Tower (1950) starring Charles Laughton, and the rugged adventure/drama Never Let Me Go (1953) with Clark Gable. Laughton went on to utilize Belita on stage in one of his popular revivals of “The Cherry Orchard” (1950). She later went on to appear in theater productions of “Twelfth Night,” “Ulysses in Nighttown” and “Damn Yankees!” Belita’s overall career started to wane in the 1950s. All during this time, however, Belita still was a spectacle to behold on ice, performing in capades, shows and extravaganzas all over the world, particularly in London. After over two decades, she abruptly retired her skates in 1956 and soon bid Hollywood farewell as well. She did appear in the second segment of Gene Kelly’s three-part experimental film Invitation to the Dance (1956) and had a minor unbilled part in Silk Stockings (1957) before she retired. In 1964 she came out of nowhere, however, to star in the Argentinian film The Terrace (1963) [The Terrace], then was gone again. Divorced from actor Joel McGinnis in 1956, she spent a greater time in England and later married Irish-born actor ‘James Berwick (I)’ (aka James Kenny) in 1967. She opened a garden centre in West London, and subsequently retired for the most part to the south of France where she remained out of the public eye. Her second husband died in London from natural causes in 2000. She had no children by either husband and passed away in France on December 18, 2005, at age 82.