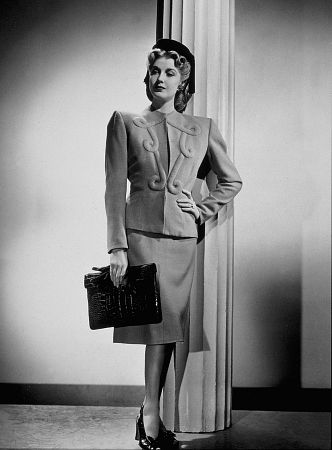 An actress from the age of 6, Anita appeared with Walter Hampden in the Broadway production of Peter Ibbetson. As a juvenile actor, Anita used the name Louise Fremault and made her film debut at 9 in the film The Sixth Commandment (1924). She continued to make films as a child actor, and in 1929, Anita dropped her “Fremault” surname, billing herself by her first and second names only. Unlike many child actors, her film career continued as a teenager, and as a blue-eyed blonde, Anita became a star in Warner Brothers costume dramas such as Madame Du Barry (1934), A Midsummer Night’s Dream (1935), The Story of Louis Pasteur (1936), and Marie Antoinette (1938). Anita complained that her looks often interfered with her chances to obtain serious roles. With her ethereal beauty, she continued to appear in ingénue roles into the 1940s as she played girlfriends, sisters, and daughters. By 1940, Anita was only in her mid 20s, but her career had turned to ‘B’ movies, and her time on the big screen ended with the rehashed Bulldog Drummond at Bay (1947) in 1947. In 1956, Anita was cast as Johnny Washbrook’s mother, Nell McLaughin, on the Television series My Friend Flicka (1955), the story of a boy and his black horse. Anita was also the substitute host of The Loretta Young Show (1953) when Loretta Young was recuperating from surgery. Other shows Anita hosted included Theater of Time (1957) and Spotlight Playhouse (1958). Her Television guest roles have included Mannix (1967) and Mod Squad (1968). Anita devoted her final years to various philanthropic causes.