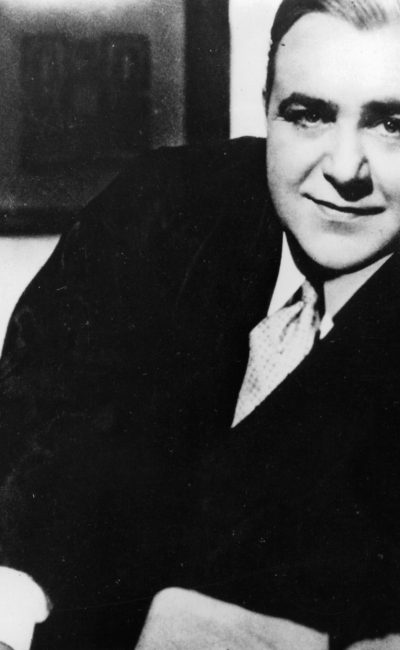 Though born in Russia and having a Russian-sounding name, Akim Tamiroff is actually of Armenian descent. At 19 he decided to pursue acting as a career and was chosen from among 500 applicants to the Moscow Art Theater School. There he studied under the great Konstantin Stanislavski, and launched a stage career. This included road company productions, in one such tour in 1920 Tamiroff came to New York City, which he liked so much he decided to stay there. Broadway suited him, and he worked steadily with the Theatre Guild from the mid-1920s to the early 1930s. He was a short, stout man with a guttural baritone voice and a thick but rather generic Russian accent that, with his skill in characterizations, seemed to mesh with any role calling for a foreign type–whether European, Middle Eastern or Asian. His voice became his principal asset. He came west to Hollywood in 1932 to break into the movie business, and first appeared on screen in a bit part in Okay America! (1932). Until 1934 his appearances were usually uncredited, but he managed to stand out in several films, one of his best roles of the time being the servant Pedro of John Gilbert Queen Christina (1933). By early 1934 he was much in demand, appearing in 12 films during that year. The next year was even busier for him, with roles in 15 films altogether, and not just bit parts–he was getting more feature supporting roles, such as Gopal the emir in The Lives of a Bengal Lancer (1935) and the comic puppet master Rudolpho in the adapted operetta Naughty Marietta (1935). He signed with Paramount in 1936 but was often loaned out to other studios. He went to Warner Bros. for one of his earliest big supporting characters: the sly Cuban mercantile agent Carlo Cibo in Anthony Adverse (1936). For Paramount, his General Yang in The General Died at Dawn (1936) brought him his first of two Oscar nominations for Best Supporting Actor. Along with substantial supporting roles in top movies, Tamiroff was getting starring roles in “B” pictures, allowing him to show his range by playing everything from amiable rogues to thoroughly evil villains. Two of his roles from that time exemplify what a versatile actor he was. As French trapper and scout Dan Duroc of North West Mounted Police (1940), he was something of a rascal but with a sense of humor and dignity. However, as the vile Colonna in The Corsican Brothers (1941), he is irredeemably wicked, and deservedly dies in the longest sword duel on film. For his role as the self-serving guerrilla Pablo in For Whom the Bell Tolls (1943), Tamiroff received his second Oscar nomination. He continued through the decade with more fine work, and in 1949 he joined the cast of Black Magic (1949) and met Orson Welles, who played late 18th-century charlatan Cagliostro. The two became friends and associates in Welles’ later film projects. Through the 1950s Tamiroff’s time was fairly divided between TV productions and films earlier in the decade and a surprising number of episodic TV and more films later. His three films with Welles, as director and sometime actor, were: Confidential Report (1955) with its Wellesian maze of flashbacks; the over-the-top Touch of Evil (1958) with its gritty surrealism and incredible cast; and The Trial (1962) (The Trial), Welles’ stylistic spin on the Franz Kafka story. Certainly it was in “Touch of Evil” (the best of the lot) that Tamiroff’s Tijuana boss Uncle Joe Grandi–outlandishly bug-eyed alternately with fear or mercurial anger intensified by Welles’ wild camera angles–stood out as a most intriguing character. He took a last fling at Broadway in 1959. For the 1960s Tamiroff continued to sample American TV but was still very active in American, French and Italian movies. His voice and talent were still a draw in films like Topkapi (1964) and Alphaville (1965). In addition, he remained on call for Welles’ meandering/unfinished Don Quixote (1992) as Sancho Panza for nearly twenty years. One of the great character actors of film history, Akim Tamiroff appeared in over 150 screen projects.